A couple of months ago I went to a fundraiser with a good friend of mine at a Mexican restaurant in the Mission District of San Francisco. The organization was YWU, Young Workers United, which organizes restaurant workers in the city, particularly Spanish-speaking restaurant workers, and helps them mobilize for fair wages and sick leave and safe working conditions. I’m a huge fan, because these are the folks that unions can’t get to and restaurants take horrific advantage of. It was a good cause and good people and GOOOOOOOOOD food. And it’s also good for me to hang out in places where English isn’t the standard language of operations, because it’s easy for me to forget the privilege I have daily because I speak the dominant culture’s language fluently.

The thing is, the dominant culture had rented the bar upstairs.

When the YWU party was in full swing, I didn’t notice it as much, but when they slowed their roll for a minute to show a brief film about YWU, I noticed it a lot more: every couple of minutes a just-grungy-enough-to-be-trendy White person would poke his or head and a wave of punk music would flood the room, drifting down from the club directly above the restaurant. They would realize their mistake and close the door (or not) and climb the steep stairs to their real destination.

This comes as no surprise to anyone who lives in the Bay Area, but La Mission is on an inexorable march towards middle-class Whiteness. The Bratt 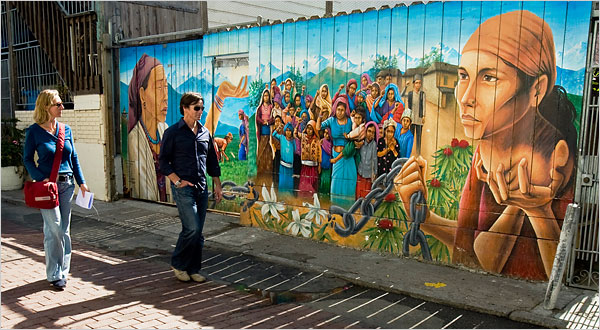 brothers made that movie for a reason: the community they grew up in is in its death throes. Those hipster kids are taking over; even the taquerias that are forever old are packed with trendy middle class kids and increasingly by moneyed ex frat boys, too. They’re not just coming in for an urban adventure on a Friday night any more; they’re there all week.

It’s one of a million casualties of gentrification across the nation (or, as my truth-telling friends at POOR Magazine/Prensa POBRE call it, gentriF**Kation).

And yet, the reason a number of my friends were part of the protest against the Google buses in San Francisco recently is because a corporation is aiding lots and lots of individuals in their individual pursuits that end up adding up to gentrification instead of recognizing their impact on the community and participating in community-based solutions to a community problem. (In policy terms, the company is creating a negative externality born by a community that does not receive public benefits.)

I remember facilitating, maybe a year ago, a group of young progressive/radical South Asians to talk about spirituality and affordable housing. The downest, most radical guy in the group showed us a video his organization had made on gentrification. It was tight. And then he dropped this bomb on the group: “We may all be brown and down, but it doesn’t matter where any of us in this room move in Oakland: we’re gentrifiers, too.”

I complain about how San Francisco is a lost cause for the people who are fighting to preserve the historic culture and also affordable housing for poor people there; not just the Mission but the whole city seems to me to be on an inexorable march towards gentrification, and even some of the most committed activists there don’t pretend they’re going to stop the rolling tide; they’re just trying to slow it.

But I’m not sure how far behind Oakland is. We definitely have two Oaklands, and the rich Oakland keeps encroaching on the poor and also expecting the neighborhoods bend to their will. Will we end up with more and more intensely contrasting neighborhoods, with the eruption that will almost inevitably result? Or will people who have called Oakland home for generations simply get pushed past the wealthy surrounding communities way out to the “affordable” locations that then require a 2-hour commute each way to return to the low-wage service jobs that a wealthy Oakland will still require?

But the joke becomes less funny at a certain point in the redevelopment process. I find myself thinking about a man speaking to the mayor at one of her listening sessions two months ago. He was formerly homeless and living in transitional housing on the edge of Oakland’s recently redeveloped Uptown neighborhood which used to be more dangerous and more blighted. “Ms. Quan,” he said, “a lot of us here are old. We can’t walk the six blocks to the bus to the grocery store, and we DEFINITELY can’t walk the six blocks back weighed down with groceries. Taco Bell’s a cheap option but it’s closed for renovations. You want us, on our fixed incomes, to go to the restaurant down the block from us? It sells $14 hamburgers. I bet they’re good, but they’re $14.”

I don’t know what the solution is, and I know that I’m part of the problem I’m trying to solve. I did joke to a friend who is gentrifying north Oakland that I didn’t displace anyone since my building used to be a warehouse, so I’m okay on the gentrification front. But I know that in reality my willingness to and ability to buy a middle class condo in Oakland changed the culture of the city and perpetuated the market for middle class housing that requires certain infrastructure standards while my friends in deep East, the Fruitvale and west can’t get access to the same amount of city infrastructure support.

My favorite alt country song goes “sometimes you’re the windshield; sometimes you’re the bug.” When it comes to gentrification, I may at one point have been the YWU member in the Mexican restaurant, but mostly I’m the White hipster heading upstairs to the punk concert.