*thin places: a Celtic term for those places where the division between earth and heaven collapse, where we can contemplate and experience the divine in the midst of our lived experiences. 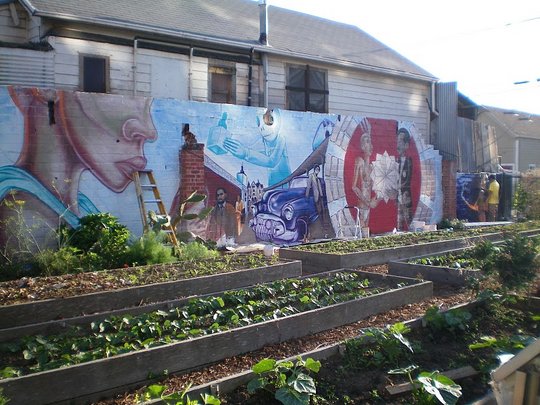 and so is this.

I went to college in Baltimore, and some of my friends still live there. My friends see my Type A self not picking up a surf board and ask me why I haven’t moved back to the east coast where I clearly belong. “I love Oakland, man,” I explain. “Oakland’s like Baltimore. But with hope.”

I know people who go back generations on this soil and I know people like me who have been here a decade or less all talking about how there is just something about Oakland. I’ve lived in cities with stores for tourists to buy souvenir t-shirts; Chicago locals will wear Cubs or (preferably–it’s class warfare out there and I know where I stand) White Sox caps and shirts, but they’re not the ones buying the Chicago Fire Department t-shirts at the gift shop in Sears Tower. On the flip side, I have yet to convince a visitor to buy an Oaklandish shirt; it’s fools like me shelling out more than our paychecks can withstand to show some Town Love. (Or locally grown Real Oakland hoodies.)

Now the people I hang with are usually also quick to say we’re killing each other in the streets and there are actually two Oaklands, rich and poor (but even moreso gentrifiers who don’t care about those who were here before them and longtime residents), one of which doesn’t care about the other and the other of which doesn’t know how to love itself all that well. Which is why 40 organizations connect with each other and stand with each other in our shared work for peace, healing and justice through the Oakland Peace Center–there’s too much to do to do it alone.

But even when we are skeptical of city leadership, when we are not sure the police department’s relationship to its citizens will ever be healed, when we don’t know what will stop babies from killing babies, we have a sense not just of the resilience of the city but of its creative energy. This land has generated visionary artists and radical movement leaders. This is the land of Julia Morgan and Gertrude Stein, of Fred Korematsu and Richard Aoki, of Huey Newton and Angela Davis (not to mention John Lee Hooker and MC Hammer). In Oakland, we may feel like no one is going to make things better but us, but we also really believe we will be the ones to make things better. (Those who don’t believe it don’t stay very long.)

The other day I remembered a trip I made to the Scottish island of Iona about four years ago. Iona is described as a thin place: “Heaven and earth, the Celtic saying goes, are only three feet apart, but in thin places that distance is even shorter,” says one article.

Thin places connect us with the Divine, which is to say, they challenge us to be our best selves. A lot of people think thin places have to be remote, and Iona sure is. Some people think they have to be meditative and quiet and peaceful. But that’s not really true. Transformation rarely involves the luxury of peace and quiet. Don’t get me wrong–lack of access to food and the constant low-grade fear of violence do not make for transformation either. I am not romanticizing Oakland as being without its profound and sometimes overwhelming brokenness. But I believe we’ve actually created some thickness in a thin place.

I can take a bus from Fruitvale station and end up in a redwood forest, far away from the highway sounds always outside my apartment windows. And I’m very aware in those moments I’m in a thin place where I can listen to God or have conversations with a friend that go so much deeper than they would go anywhere else.

But I can also sit on the free shuttle downtown on my ride home and listen to a tale of abuse and survival and being constantly silenced and loving God but not trusting God if I actually bother to make eye contact with the schizophrenic woman in front of me who starts out our ride cursing and deriding me in the third person but thanking me for affirming her when she gets off the bus eight blocks later, without me saying more than three words.

And I can listen to the lived experiences of the young poets I sometimes get to work with who have faced the worst of what this city has to offer, and because of their own resilience and a few other visionary Oaklanders who had their backs, they’re hustling and also giving back and mentoring the next generation of kids growing up in their neighborhoods.

And I can sing and pray and shout and protest with deeply faithful people for the transformation of our city’s approach to jobs, and over months of people putting their bodies on the line and working out struggles with each other and stopping just short of throwing punches in planning meetings, see how a plan got passed but also relationships got built and hope got restored and people’s vision got much much bigger than the policy we are currently implementing.

I think the palpable spiritual power of our forebears in this community is not an accident. Oakland has given the world some of its greatest visionaries and poets and changemakers because it is sacred ground, because it is a thin place. I see that in the redwoods and in the urban farming that is reconnecting longtime residents to their own land. I see it in the deep compassion of Belinda and Keasha with Project Darries and Marilyn Washington with the Khadafy Foundation as they stand with people in deepest grief and work to prevent the violence that leads to such grief. I see it in all of the partners at the Oakland Peace Center, all of whom are making Oakland a more obviously thin place.

I also think it’s no accident that so many of the most inspiring people and organizations I work with are practical or radical, but they have a profoundly compassionate and spiritual edge to their work. I believe there is more blending of the spiritual and the community-transforming in social service and advocacy and culture shift work in Oakland than anywhere else in America. Even most of my friends who hate religion keep articulating spiritual commitments in their work and vision without even realizing. I think they can’t help it–it’s in the thin air we breathe here.